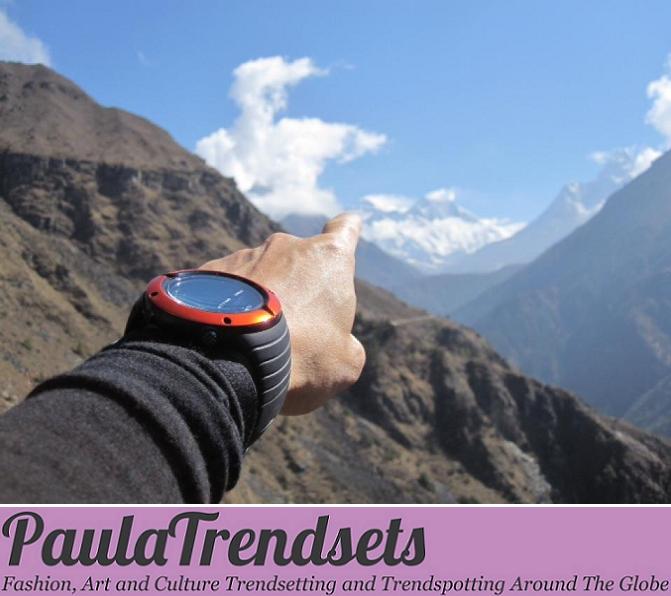 PaulaTrendsets is proud to present today one of its most exciting travel articles ever.

We followed the day-by-day chronicle of an ongoing mission to reach the peak of Mount Everest on the Himalayas.

George Andreou, one of the members of the mission, will be the first Cypriot to reach the highest mount peak of the world. Quite an important achievement for this small island country on the Mediterranean, struggling to get rid of the Turkish forces which occupy half of the island for the last 4 decades. George says will feel genuinely proud to raise the flag of the Republic of Cyprus on the top of the world.

“Climbing contains much pain, but also big moments. It’s for those big moments that I climb, for the moments that make you feel more human”, Andreou adds, as he is awaiting for another big moment in his life; becoming a father. His wife will bring to the world their first child on her birthday, the 29th May, also the anniversary of the day when Edmunt Hillary became the first man in history to step on the highest peak of Everest in 1953. 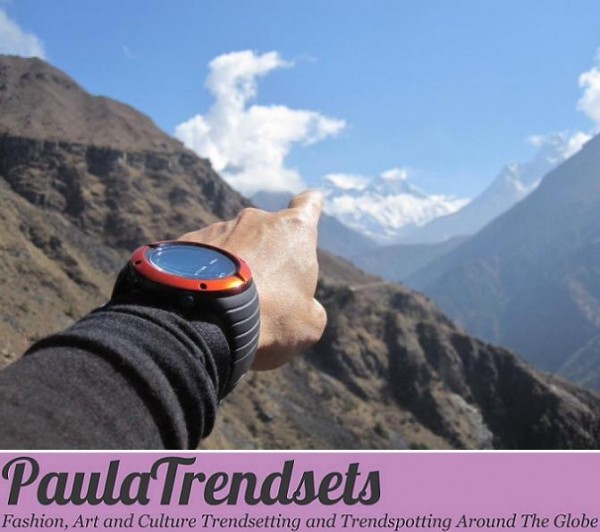 Before we continue with the exciting chronicle of the mission, I would like to thank Loizos Ioannou for contacting PaulaTrendsets for publication of the first photographs that his cousin has been sending from more than 7000m above sea level.

I would also like to wish George and all the members of the mission good luck with this and all the goals in their lives, and a safe return to their homecountries and their loved ones, feeling stronger, wiser, and responsible to take on inspiring others to stand their ground and ambitions with team work and respect for each other; something that we tend to forget in modern societies.

Indeed, George Andreou was right whe he said that these big moments of achievement, make us remember how we are all human.

The members of the mission arrive in Nepal and meet each other for the first time. 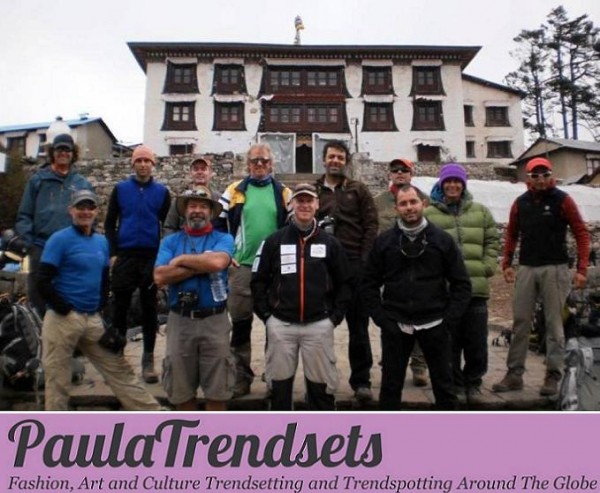 Arrival to Lukla. After 5-7 hours of trekking, the mission arrives to Monjo, having already reached 2840m/9,317ft

The mission departs from Monjo to Namche Bazaar . The scenery here in Monjo is very sad, because of the fierce thunderstorm of the 6th February, which left most houses with no roofs, uprooted many trees and covered with dust the whole village. Trekking continues for 3-4 hours, until they have arrived at Namche Bazaar. They are now at 3440m/11,286ft 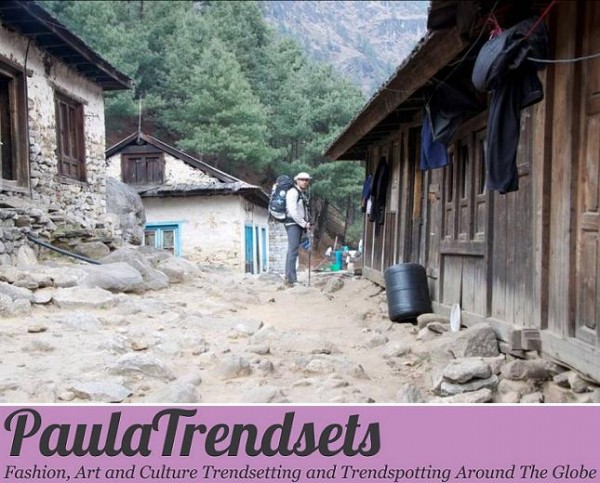 The mission treks for 4-5 hours from Namche Bazaar. Tomorrow they will visit a Buddhist monastery and attend a service with the monks. 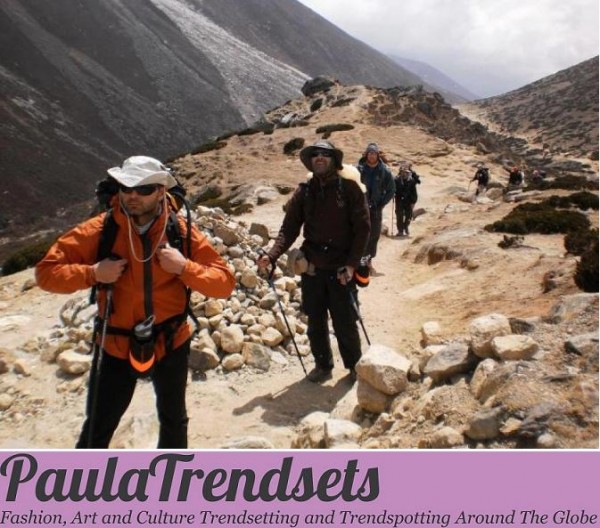 After the mission has been blessed by the monks, the climbers continue trekking for 7-8 hours, destination to Pangboche (3930m/12,894ft) .The weather is cold and it snows.

Under the blessings of the 88-year-old monk Lama Gehse, the mission will spend the night in the village of Debuche (4412m)

Full Moon on the slopes of Mount Everest. It snows and the weather is extremely cold. The mission moves today to Lobuche (4910m/16,109ft). They will need a 6-7 hours trekking. 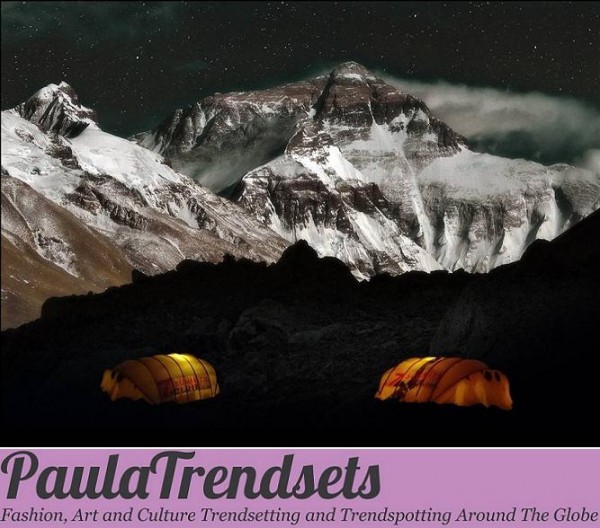 Only 1 day away from the Base camp.

After another 6-7 hours of trekking, the mission is now at EVEREST BASE CAMP, on 5364m, getting closer to the glacier. They set up special tents for dining and tents for the toilets and shower. 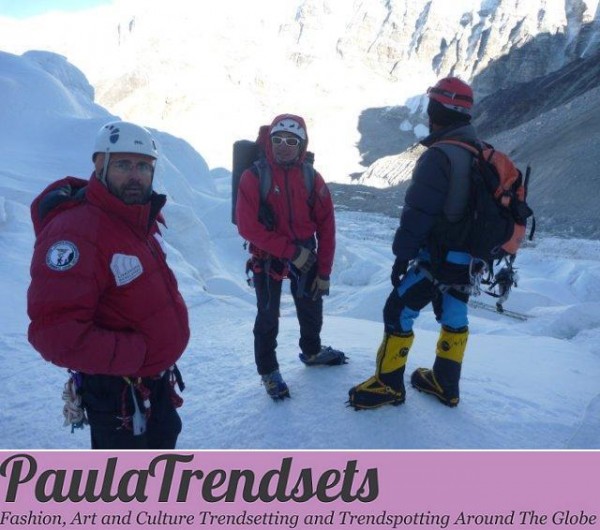 The assistants of the team have completed their mission and, after they have reached EVEREST BASE CAMP, they return to Cyprus. The climbers are left alone with the Heads of mission. During the following days, they will continue training from the BASE CAMP. The mission climbs up and down the different altitudes until the body gets used to the atmospheric conditions. In a few days, they are about to start their mission to the Camps. 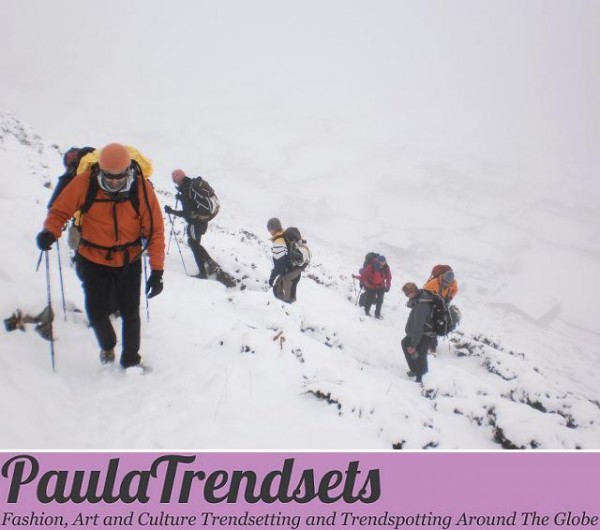 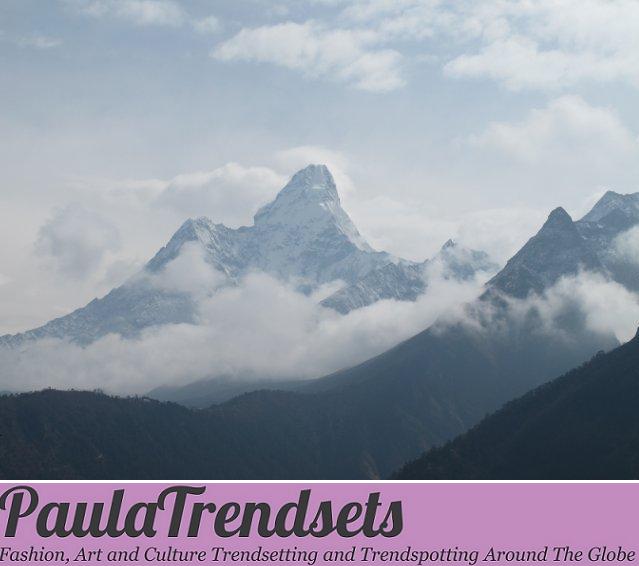 The mission has started prepping ropes for jumars (ascending ropes) and other equipment, as they prepare for the glacier. They will need to use correctly the tools on the ice. Here on the camp, the climbers have a dog in their company. He was found here at the EVEREST BASE CAMP.

The team will be trained for climbing with secured ladders, rescue ropes and travelling on the glacier on steady lines. By the end of the month, if all goes well and the weather conditions don’t cause them delays, the climbers should have reached camp 3. 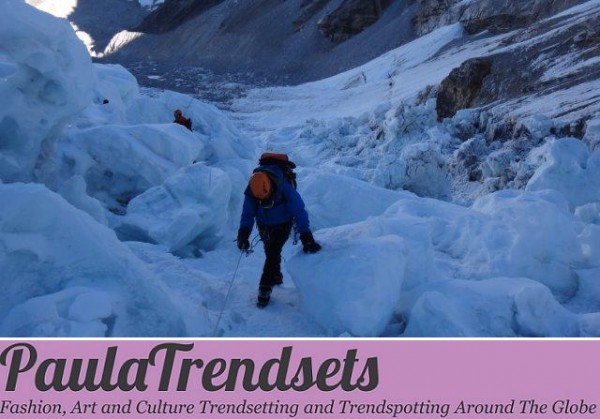 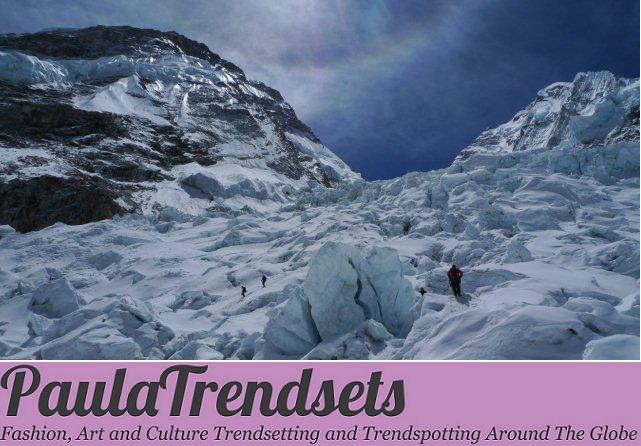 The training continues. Doctors inform the climbers about falls on ice and their consequences. The climbers train with double and triple tied ladders.

The mission has arrived and will stay for the night at Kala Pattar (5545m). Back to the base tomorrow.

The training continues. The assistants of the mission, have safely returned to Namche Bazaar.

The mission moves towards Camp 1, climbing and exercising with double and triple ladders. 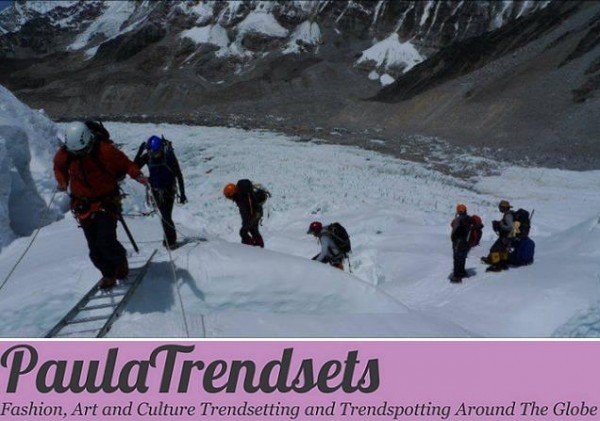 Climbing continues from Camp 1 to Camp 2. Back to Camp 1 for the night.

Once again, climbing from Camp 1 to Camp 2, back to Camp 1 for the night

The mission is taking a break and exercising in Camp 1. They will have moved further by April the 23rd, when they will be able to spend the night at Camp 2. Exercising will continue with climbing from Camp 1 to Camp 2, until the body gets used to the new oxygen conditons on Camp 2.

The mission is already at Camp 2. In a few days, they will be able to move to Camp 3. The going is getting rough, as the atmosphere conditions are getting harder and harder. Strong winds, severe cold and traps make the climbers fear for their lives. 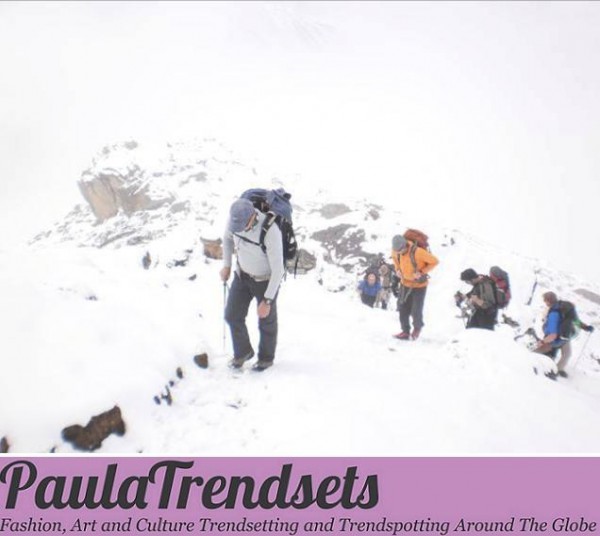 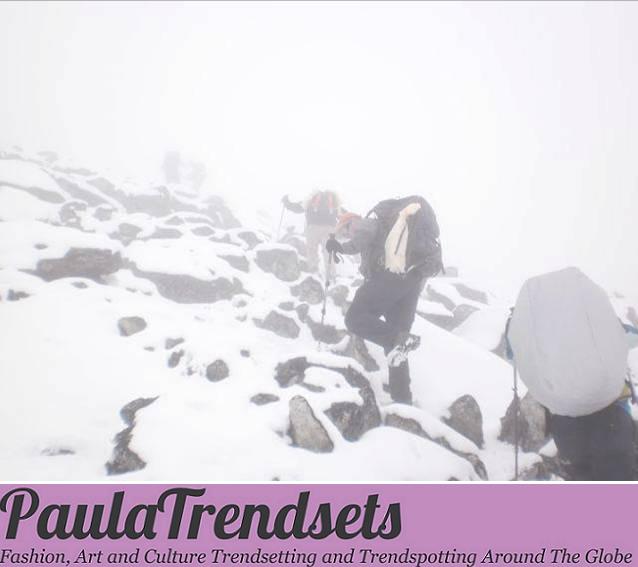 Camps 1 and 2 are preparing to receive the mission coming back from Camp 3 tomorrow.

The team had an excellent collaboration while climbing to Camp 3 (7300m) and returned to Camp 2 (6500m) for the night. Canadian climber Travis McPhee had to return to Camp 1 for his safety, since he suffered symptoms of Acute Mountain Sickness. Camp 3 (7300m), South Col (7900m), Camp 4 and the top of Mount Everest are the mission’s next goals. 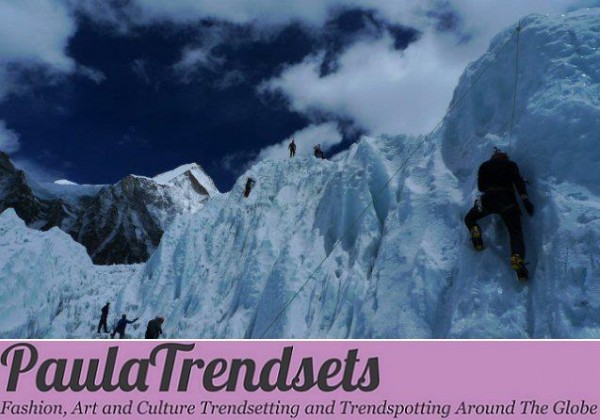 An avalanche slides down the slope and hits near the camp, coming from the northern side of Nuptse to the westcamp Cwm, the valley Lhotse and Nuptse). The climbers count each other. They are relieved to find out that everyone is sound and safe. They will stay at Camp 2 for the night.

The mission climbs to CAMP 3. The climbers will stay there for a few days in order to get used to the oxygen levels on this alttude. In the meanwhile, they continue the preparation for CAMP 4, by transporting there oxygen, food and tents.

The mission will rest today. They will need a maximum of forces in the following days, as they get closer to their destination. It is expected that the winds will slow down until the 3rd May and will not be as violent as in the few last days. The members of the mission are now proven to be strong and they have to remain in good health. If they were not in a good shape, they would not proceed higher than CAMP 3, as they get closer to the DEATH ZONE. 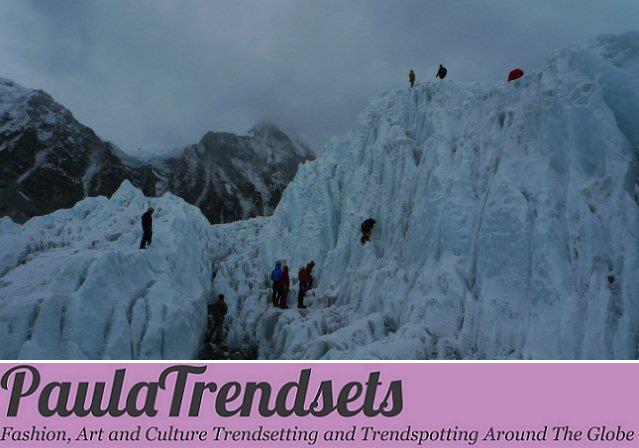 AT THE TIME OF PUBLISHING THIS ARTICLE, THE MISSION IS DELAYED FROM MOVING TO SOUTH COL DUE TO SEVERE WEATHER CONDITIONS.

STAY TUNED ON WWW.PAULATRENDSETS.COM TO SEE HOW THE MISSION CONTINUES THEIR DANGEROUS TRIP TO THE PEAK OF MOUNT EVEREST, DAY-BY-DAY.