Taking the Gemfields brand in a new direction, the film explores the mystery and allure of rubies, one of the most precious and revered gemstones in the world.

Celebrated as the ‘king of gemstones’, rubies have an almost other-worldly quality which is reflected in Burton’s film interpretation. Carefully combining intricate details from inside the gemstones with close-up shots of Mila, Burton creates an abstract piece that celebrates not just the beauty of rubies, but also the beauty they project through light.

Mila Kunis, Gemfields’ global brand ambassador, said: “Working on this film with Gemfields and Jeff Burton was an amazing experience. I was given the opportunity to try and capture the allure and passion that rubies evoke in an unexpected way. I believe it will help to inspire a whole new generation to fall in love with this rarest of gemstones.” 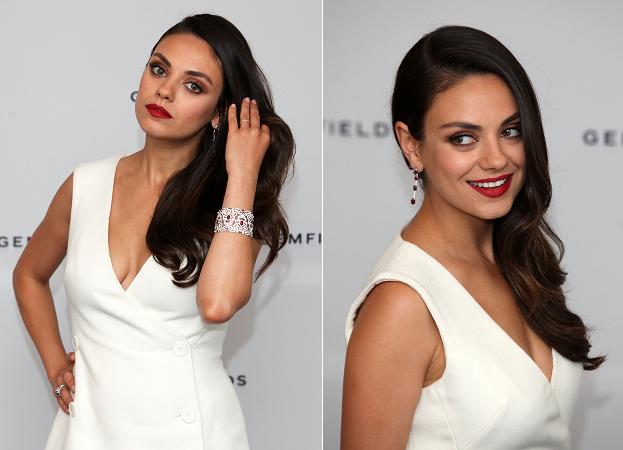 Actress and Gemfields brand ambassador, Mila Kunis, attends a photocall for the launch of Gemfields Mozambican rubies in London at Corinthia Hotel in London, England. (Photo by David M. Benett/Getty Images for Gemfields)

A regular contributor to French Vogue, Vanity Fair and The New York Times, Jeff Burton has collaborated with Tom Ford, Yves Saint Laurent and Celine on advertising campaigns and film projects and his photography has been exhibited at numerous national and international museums around the world.

The ruby is one of the most historically significant coloured gemstones and has accumulated a host of legends over the centuries. A symbol of passion, wealth and success, the ruby was a favoured gemstone of royalty and aristocracy and regarded by many as endowed with extraordinary powers.

The Gemfields Montepuez ruby mine in Mozambique is now thought to be one of the largest and most important sources of responsibly sourced rubies in the world today. An exceptionally rare pair of matching rubies, with a combined weight of 45 carats, was discovered at the mine earlier this year and successfully sold at auction last month.

Gemfields is the world’s leading supplier of responsibly sourced coloured gemstones, specialising in emeralds and amethysts from Zambia and rubies from Mozambique. Positioned at the intersection of exploration, mining and marketing, the company has pioneered leading environmental, social and safety standards within the sector and by doing so is able to provide discerning customers the assurance they require of the responsible journey their gemstones have taken from mine, to market. In 2013, Mila Kunis was announced as Gemfields’ global ambassador and continues to represent the company in their latest advertising campaign.