I was walking down Regent Street on a sunny Sunday afternoon when a lady in a uniform stopped me. It was the Regent Street Festival and the busy street in the commercial heart of London was closed to traffic. Live bands, food canteens and ice-cream sellers as far as the eye could see. “Would you like to hear about our project and try our nailwraps?”, the lady asked.

I love to try new ideas, and, the idea of a manicure with the portraits of iconic women of influence of the last 150 years was, well, weird. Thinking analytically, the first thought that crossed my mind was, isn’t it a blasphemy to those women and all they have suffered for fighting for women’s rights, to use them in such a perishable luxury as a manicure? Is this feministic? Is this right?

Then I realised that, in fact, it was interesting and admirable how these women of significance and what they have represented have made their way into the mainsteam lifestyle of contemporary pop culture. After all, if our educational system, our media and our general environment have failed to present us with the stimuli to learn and talk about these women until today, let’s spread the word about them and their ideas at the chance of discussing a funky manicure.

Waiting in the queue gave me enough time to read the brochure of the pop-up nail bar and learn that “Nailwraps: Influences” is an art project initiated by artist Phoebe Davies. Her art is often ephemeral and chanced upon, existing primarily in pedestrian spaces as well as in galleries and institutions. Her practice is defined by its location and context. She works both in response to and in collaboration with individuals and communities, investigating and exploring how people perceive their social framework.

Over the past year, Phoebe has been working for this very project in collaboration with groups of women, exploring current attitudes to feminism, female expectations and aspirations. Drawing upon the contemporary culture of nail art, these dialogues and collaborations have resulted in a series of printed nail design sets depicting a selection of ten influential women nominated throughout the project, which will be continued in 2013.

Better yet, you can nominate your own women of influence for the next set of nailwraps on Twitter @phedavies #femiheroes – it’s all about girl power. 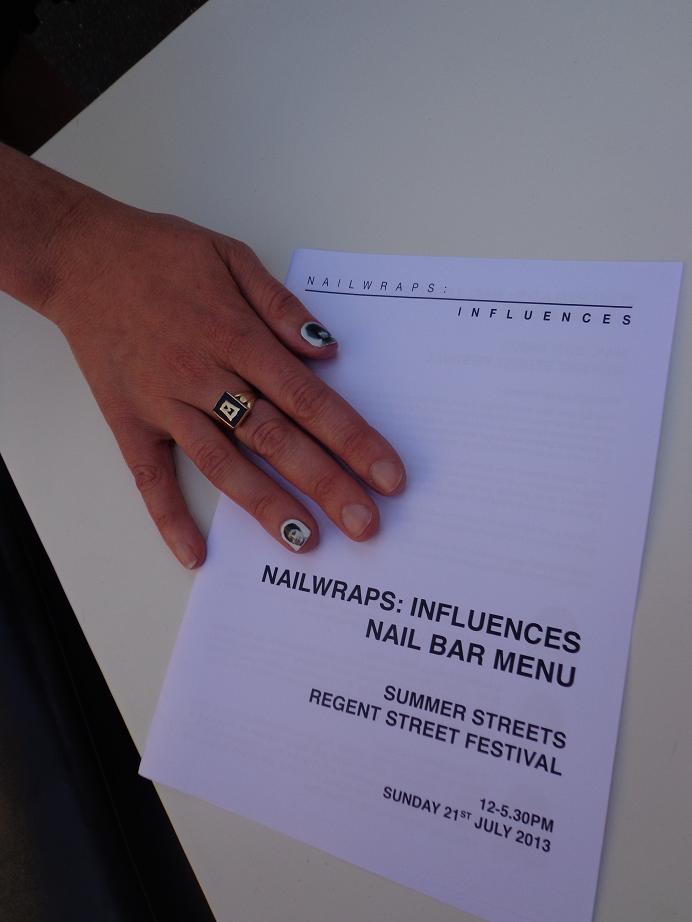