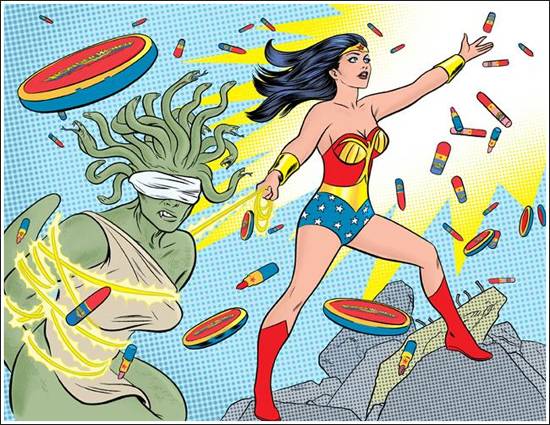 Guess what – Wonder Woman is back in fashion.

The iconic superhero girl who rose to stardom in the 1970s thanks to the omonymous TV series, was actually born in the 1940s -at the same time when World War II urged women to take up the place of men in the production line, offering the so-called “weak gender’ qualities and rights they had never dreamt of before.

Much more than random cartoon heroes and rather prophets of the feminist movement, superheroines like Wonder Woman have recently inspired the modern worlds of fashion, beauty and, once again, the small screen. Just months ahead of the reboot of the Wonder Woman tv-series, MAC has launched an inspiring make-up series named after the heroine. MAC Wonder Woman series launched yesterday exclusively at Selfridges. Judging by the queue, Wonder Woman is still a huge success nowadays.

When it comes to fashion, designer Alex Noble, famous for the eccentric bodysuits that he creates, had come up with the idea of a superhero girl some days ago during a customer event for the store. Alex’s superheroine story doesn’t have a happy ending though.  His fashion supergirl gets trapped in a spider web.

In the following video, he explains why his superheroine is in a rush and how it all ends for her.

And we’re not done with “supergirls”. Now you’ve started crooning that nice old tune by Reamonn, take a look at MAC’s Wonder Woman collection and how you can make the best of it, for an all powerful, superheroine feel. Zap!